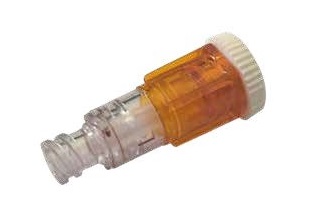 The device is a needle free connector equipped with female luer lock and self-sealing (normally closed) male luer lock connections, both compliant with the ISO 594 standard.
The raw materials used for the production of the device are Polysulfone, Silicone and (excluding the passage of the fluid) Polycarbonate.
Technical data of the device:
– Filling volume: 0.1 ml
– Residual volume: ~ 0 ml
– Opening back pressure: 45 psi (3.1 bar)
– Neutral displacement
– Gravity flow: 102 ml / min
– Residue at disconnection: <0.02 gr of liquid

The device is designed for the administration of dangerous liquids and drugs, in particular to reduce accidental leakage from the male luer connector.
The male luer lock of the device is normally closed and is activated only when a female luer is connected, allowing the infusion of liquids.
When disconnected, the valve closes automatically and prevents liquid leakage.
The conformation of the male luer and the closing mechanism is such as to minimize the presence of drug residues.
The device is equipped with a female luer lock that allows connection to numerous infusion devices, such as syringes or infusion sets; a mechanism with locking tooth prevents accidental disconnection of the device and the consequent dispersion of liquids or dangerous drugs.